Zelda II: The Adventure of Link

Bring on the pain.

Zelda II is something of a black sheep in the Zelda franchise and it’s easy to see why. The second entry in this incredible franchise plays very differently than its predecessor and any of its successors. There is an RPG element to Adventure of Link in that you can gain experience by defeating enemies and leveling up. The combat is far more personal and refined compared to its other 2D brethren, making it a dance of subtly, rather than mindless swinging on the over-world. That’s not to say that Adventure of Link had lasting impression on the franchise. In fact, I dare say the critically acclaimed 3D Legend of Zelda titles draw on this formula in ways most players hardly notice. It’s not just the personal man-to-man (or man-to-moblin) style fighting either. Zelda II does a phenomenal job of hiding shortcuts in the game mechanics. Instead of traveling through Death and Mountain, the player can bypass that labyrinth of enemies with the hammer you get near its end. I do not, however, have only praise for this title though.

Rhythm in games is not a new concept. Though games like Guitar Hero and Rockband took that to a more literal level, rhythm had always sort of been there. If you need to be convinced, I point you to the various competent Adventure of Link players on YouTube. I am not one of those guys. Watching Adventure of Link played by an expert is like watching a fine dance of finesse, timing, and utter skill. Watching me play Adventure of Link is like taking that same dancer, getting him drunk and chopping one leg off. Nonetheless, I prevailed (or at least I hope I will at the time of writing this impression that I had to record prior to completion- I did). I say that to say this: most of us are not experts at this formula and it’s bloody hard. I died countless times and there were situations I encountered that I never did in a Zelda game before or since- situations where I evaluated whether or not it was worth the risk to even fight an enemy. Sad to say that my pride was hurt as I cast Jump Spell after Jump Spell to simply bypass an annoying or troubling enemy. I like a challenge as much as the next guy but it takes a truly hard game to make me turn tail on regular enemies. I could praise this as good design but I think part of it is owed to seemingly inconsistent collision points and clunkiness in control. I am aware that this was an NES game but still. When a game is difficult because the controls are crazy or unresponsive, that’s a negative design aspect. 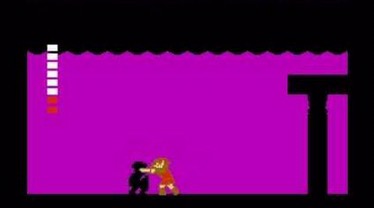 This guy is freaking hard.

Like with The Legend of Zelda there’s not much story to speak of but we do get some primitive bits of actual life in Hyrule. There are actual villages and non-price gouging, non-cave-dwelling, non-old people. We actually get to encounter Princess Zelda (admittedly sleeping until pretty much the end). The real treat, however is the final boss, which is to say that Link has never had to face down his inner demons quite like that before… Well, at least not until that fated watery rematch (or original match as it were chronologically) in Ocarina of Time. That being said, I didn’t hate anything in this game as badly as I still hate Like-Likes.

The Legend of Zelda: A Link to the Past

This is just plain righteous.

Now THIS was a transformative and integral experience to my childhood and it’s nature as a masterpiece of gaming is felt even as an adult. There is a timeless quality to A Link to the Past. Almost anyone who plays it remembers it quite fondly and I can say with certainty that it is not mere nostalgia that fuels that feeling. A Link to the Past really took every working element of its predecessors (and if you think Zelda II offered nothing here, I point to magic) and fine tuned it. The transition to 16-Bit SNES power was an incredible one.

The gameplay for A Link to the Past is a described as simply a puzzle-solving dungeon crawler with an exploratory overworld. The Hyrule presented in A Link to the Past is richly populated by NPCs and enemies alike. Exploration on the overworld is cleverly designed so that you can’t advance unless you have retrieved special items from the dungeons, which are likewise designed. Almost no item in your inventory becomes useless, which is more than some titles in the series can say- even the greats. The combat is simple but effectively fun. Now is the moment to appreciate an important distinction between A Link to the Past and its predecessors: Link swings his sword. One might suggest that he always did but this is not true. In both previous games he stabbed directly in front of him so unless an enemy was directly in front, that enemy wasn’t getting hit. In A Link to the Past, there is an arc of collision for the blade and that makes and amazing difference.

The third title in the Zelda franchise is also the first with a story worth mentioning. Spoilers will follow. While the Triforce played a role in Zelda I and II, it wasn’t entirely clear what that role was. A Link to the Past gives us our first glimpse into Hyrule’s history and it ain’t pretty. The game begins with a description of wars waged over the Golden Power of the Sacred Realm. Link is woken by a psychic message from the imperiled Princess Zelda. The advisor to the King (you know, the usual suspect since Rasputin), Agahnim, has hunted down the descendants of the sages who sealed away the Sacred Realm so that the wars that ravaged Hyrule for the Golden Power would cease. His intent is to break that seal, to unleash Ganon- the Demon King who seized the Golden Power centuries ago and was, in fact, the reason for sealing the Sacred Realm away. Aganhim weakens that seal for his master but Link charges in to win the Pendants of Virtue, claim the Master Sword, save the Maidens who descended from the Sealing Sages, and defeat the Demon King in the Sacred Realm (now a horrifying, parallel, Dark World antithesis of Hyrule crawling with Ganon’s corrupted followers). That’s about it, but it was a nice change of pace to know why the player is doing what they are doing and not just what.

A Link to the Past is the favorite for many players in the series and while I’m willing to let even my experienced mind change, it is mine up to this point. This masterpiece of gaming took an already compelling formula and improved upon it in ways that were meaningful not only to the franchise, but to gaming as a whole. I know folks who barely dabble in gaming at all that fondly recall the adventure that is this game. I can’t recommend the NES titles unless you are a franchise fan or retro enthusiast. This is not so with A Link to the Past. If you have yet to play this title, there is a void in you life in need of filling.

Miss out on the previous article in this series? Click this link to catch up! Part 1

Graduated top of my class in the school of hard knocks. I live in Raleigh, NC with my wife and (allegedly) zero kids. I work for a Property Management Company, create pointless trivia games, and manage various social projects. I'm as boring on a job application as I am an "About Me" page.
View all posts by nuclearfish2013 →
This entry was posted in All, Video Game Reviews, Video Games. Bookmark the permalink.

2 Responses to The Legend of Zelda Experience: Part II