Ubisoft tried something a little different but I’m not sure that it entirely paid off. But, at the same time – I think it really may have. With my time in Bolivia, I found myself lost in the world for hours (35-40 hours to be exact). Wildlands appears to be that Ubisoft took The Division, tweaked it, added a different story and threw it in South America. I’m gonna break this game down for what made it fun for me, then my irks and top it off for if I recommend it or not.

I’m going to be fair and honest here — I skipped the beginning cut scene due to seeing it so many times in the alphas/betas that I participated in. I cannot tell you majority of what happens from time to time and ultimately I don’t think it really matters, as there are two different endings. One is just going through the game casually and going to the “big boss fight” and one is completing every story mission, side mission and getting every collectible for the “100% ending”. I did both, and I much prefer the non-100% ending. Towards the end, I was relieved that I finished off the list of everything and was going to the big boss fight only to be let down but what actually happens. However, the end cinematic/epilogue is awesome.

I’m not used to Ghost Recon being a massive open world game with tons of collectibles and such to obtain. The previews got me excited and the thought that I could approach any situation however I want was an awesome premise that my friends and I would take major advantage of. While my time with my friends was short (2-3 areas), it was awesome experiencing bugs, missions and the wilderness of Bolivia. Going back to the actual gameplay – the driving and flying of this game can be incredibly frustrating. Sometimes it feels like you’re in complete control of the vehicle and the next you’re turning way too sharp and off the mountain you go. Another point I want to make is about the skill tree. While having some amazing, game changing perks, the game is filled with a bunch of filler skills. The drone, for example, is an awesome gadget that I’m glad they implemented into this game. On the other side, I think binoculars have zero use in this game. The drone is much better, can scan enemies that binoculars can’t distinguish and can spot enemies that you can’t see from your location. Lastly, lets discuss the gunplay. I throughly enjoy getting into combat in this game. It rubbed me wrong when I saw videos of it being a third person game but when aiming down sights, it’d switch to first person. However, unless I was in a building, that’s the only option I used. It’s so much better and makes the game more fun. There is a very large selection of weapons in this game, but most of them are useless once you find a weapon you really like. Also, no RPG’s, SMAW’s or anything to take out helicopters bothered me but upgrading your skill tree will make you be able to destroy one in a single clip.

How Hard is the Platinum Trophy?

It’s no secret that I am a big fan of PlayStation and trophy hunting. Wildlands is a fairly simple, straightforward game that basically hands the trophy to you for completing the game and collecting all collectibles. There are a few difficult ones like killing 7 people with C4 and another 7 with a single mine; but, after a few tries – you will get it with ease. No trophies are missable — so, play the game how you want to play it and if you enjoy it enough, go for the Platinum. It does require a few hours of grinding; but, check YouTube channels like PS4Trophies or Powerpyx for help on grinding locations and help for miscellaneous trophies. I put on a few podcasts on and caught up while spending a few hours grinding resources until I earned the Plat. 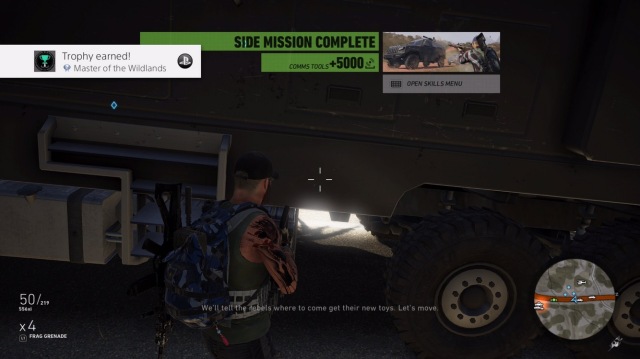 I spent 35-40 hours Ghost Recon: Wildlands and I enjoyed majority of my time with the game. The level of fun that the game provides outweighs the bugs, frustrations and lack of a lackluster, predictable story. I’d recommend this game for anyone who likes open world games, shooters, or very casual role playing games. If you’re looking for a deep story, polished in every aspect or game changing way to play, you will more than likely be let down.