Diagnosis of Guardians of the Galaxy Vol. 2

James Gunn surprised audiences everywhere when, in 2014, he took a couple of green aliens, a talking raccoon, a talking tree, and a human stuck in the 80’s, threw them in space and made one of the most entertaining and delightful films of the year. Three years later, and Gunn returns to the directing chair to release Guardians of the Galaxy Vol. 2. So, how does it compare with the first? Unfortunately, it doesn’t, but it’s not without its own charm.

Between this and Suicide Squad making insane amounts of money, it seems audiences don’t really care about pacing, because it is really bad in both. Gunn seems to have made next to no attempt to give this film any semblance of structure. We start fun enough, but the main plot point, if you can actually call it that, doesn’t come in until what feels like 30 minutes into the film. Then, when it finally does, Gunn begins 4 side plots that feel like their own separate movies that are running concurrently with it. What makes matters worse is that they have nothing to do with the main plot, making them feel jarring when we jump from side plot, to main plot, to other side plot, etc. Rocket must deal with his anger and learn to work as a team, Gamora is dealing with her sister who wants to kill her, Yondu is an outcast in the group he once belonged, and Peter may have found his dad. That’s a lot going on, and the movie makes no attempt at intricately connecting any of these plots in a coherent way, undermining the emotional impact of it all and destroying the pace. Gunn wants to deliver an emotional gut punch, but not one of the conclusions to any of these plots earn that. They’re set up improperly and are underdeveloped because of the film being overstuffed.

The pacing is also done no favors by an alien army that should have stayed in the opening scene but quickly outstays their welcome, most likely to fill the background of the films climax with weightless CGI action, and some really forced humor. The film can certainly be funny and has a couple of laugh out loud moments, but often the jokes go on far too long. Many jokes that start off as amusing quickly become genuinely annoying when the movie continues to run with them for several minutes at a time. There were a couple of moments when I literally couldn’t believe the film was still making this joke. And much of the subtlety in the delivery from the first is gone, with most characters hamming it up in the bad kind of way and over delivering their comedic lines. 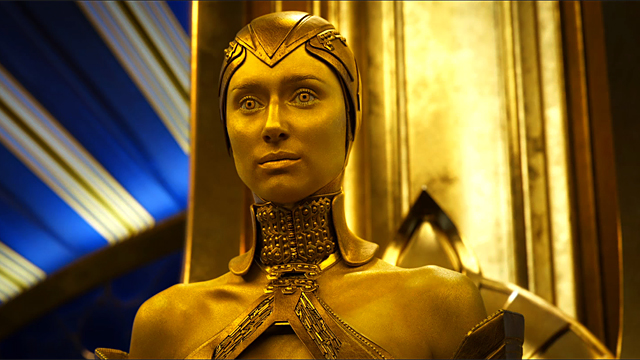 Fortunately, aside from everything that doesn’t work, the movie still manages to be fairly enjoyable. While Gunn’s direction often has them over acting, the cast is still clearly in love with their characters, which adds to the enjoyment for the viewer. And while the movie doesn’t set up or finish emotional arcs properly, it’s nice to see these characters being treated as characters and not just quip machines. Yondu and Nebula are the standouts this time around, both being given a lot of extra depth and Michael Rooker and Karen Gillen both play their parts incredibly well. Rooker gets to make Yondu into a sympathetic character and actually gets some emotionally powerful scenes. Gillen as Nebula carries with her a cool sense of villainess swagger and makes the most of every scene she’s in. Kurt Russel is the big newcomer this time around, playing Ego, and while the movie often reduces him to an exposition machine, he’s such a great actor it’s sometimes hard to even notice.

The movie’s most impressive aspect is its visuals. The first was quite the spectacle, but this is really something else. Between the aliens and the new locales, Vol. 2 fully embraces the weird, psychedelic nature of the Jack Kirby 1960’s and it’s all the more fun for it. Ego’s planet is a breathtaking display of the imagination of Gunn and it’s always pretty and unique to look at. Music is once again important to the film, and while not nearly as memorable as the first, it still serves the movie well and capitalizes on the emotions of the scene.

Guardians of the Galaxy Vol. 2’s stunning visuals and a cast that’s clearly having a blast is just enough to save this movie from itself. However, the films totally disjointed narrative and forced humor keep this far from the highs of its predecessor.

I am a film obsessed college student who enjoys talking about geek culture in whatever capacity available. I think that DC and Marvel fans should unite, just to spite those pretentious Dark Horse Comics fans. I also co-host the podcast Underrated, where we defend movies that we think get a bad rap.
View all posts by jameslhamrick →
This entry was posted in All, Film/TV Reviews, Marvel, Movies and tagged Chris Pratt, Films, GotG, GotG2 Review, GotGV2, Guardians of the Galaxy Vol 2, James Gunn, Kirt Russell, Marvel, MCU, Reviews. Bookmark the permalink.