Quick Hits! Fate of The Furious and King Arthur: Legend of the Sword 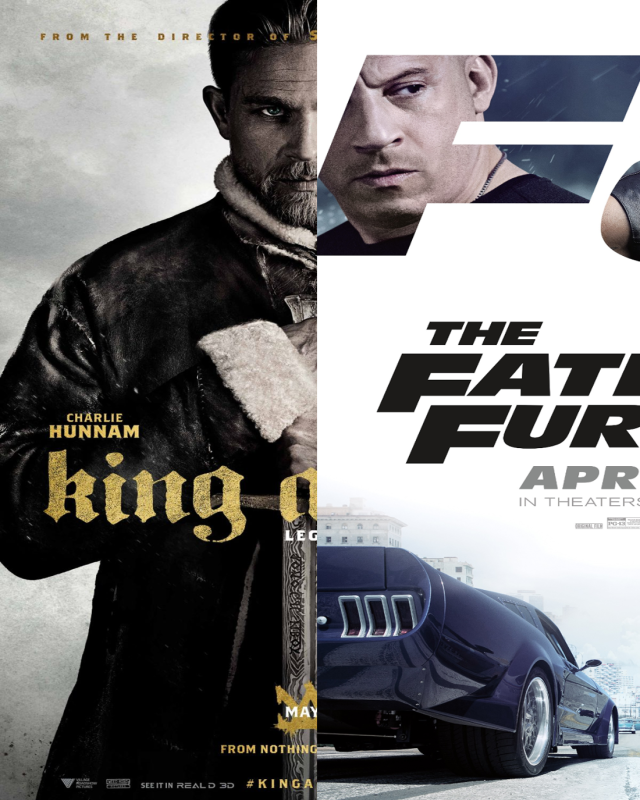 We’ve entered that time of the year, folks! It’s the time where there’s a ton of movies coming out, generally once a week, and how on earth are we going to have the time to see everything!? Truth is, we really won’t and as a consumer you need to pick and choose what titles you deem are worth seeing. So today I bring to you Quick Hits! It’s my personal attempt to give a quick review on a movie or two that maybe you decided to pass on while making such a decision. I can’t blame you for not seeing these films but I will admit that you probably missed out on a good time! So join me below as I take a quick look at two recent films, Fate of the Furious and King Arthur: Legend of the Sword.

Eight movies, can you believe that? This film series has eight movies. I’ll admit that I never thought a film about cars would hold everyone’s attention for as long as it has but here we are. Fate of the Furious pits Dom (Vin Diesel), teaming up with a mysterious woman (Charlize Theron), against his former team, and a few other familiar faces, as we are led around the world on a trip to discover how far will one go for their….family? I know it’s clichéd at this point, and we even joked about it on the first episode of Audio Asylum (which you should seriously give a listen to!). Fate of the Furious offers a pretty fun experience albeit at the expense of a plot with a twist that is a bit cheap, in my opinion. I won’t spoil it but the twist had me exclaiming “Seriously?” and I swear they tried to shoehorn as many people as possible from the franchise into this. The series is getting to be as bloated as a Marvel film with all of the cameos, supporting actors, secondary supporting actors, references to older movies, and so on. Honestly, if you weren’t a fan of the films before then this won’t do anything for you. It’s more of the same even though I’m personally starting to feel a bit fatigued with the series at this point. The main villain was also pretty weak, they build her up to be big only to pull the rug out from underneath her. I thought it was cheap and all that was missing was a good twirl of the mustache from the villain. All in all, I enjoyed the stunts, the locations were good not great, and the soundtrack was pretty good. The dialogue between Hobbs (Dwayne Johnson) and Deckard (Jason Statham) was hilarious, the two had really good chemistry and I hope we get to see more out of them from the future. I also enjoyed the interactions between Scott Eastwood’s character and Roman (Tyrese Gibson) although I would have liked to have had a little more from Eastwood. If you love the mindless action flicks then by all means, this movie is for you, just forget about the plot and you’ll be alright. F8 is good not great and is trying so hard to live up to Furious 7 that it unsurprisingly falters in the end. So are we ready for number nine? Two more films (at least) to go folks…so stay tuned.

I know no one wanted a King Arthur origin story this year but boy did we get one! I absolutely adored this film even though it has some very serious flaws. I’m a massive fan of the fantasy genre and I’ve been bummed for years that I’ve not gotten a good film to satisfy my craving that began when I first saw Lord of the Rings back in middle school. The Hobbit films were merely okay to me as I wasn’t a massive fan of the extensive CGI and with how much they altered the original story by J.R.R. Tolkien. That would technically mean that I should not be as big of a fan of King Arthur: Legend of the Sword as I am but I love how the film has a bit of insanity about it. This isn’t a classic retelling of the old legend of King Arthur so much as it is a modern adaptation of how King Arthur came to be who he is. The plot lays it all there on the table, it has nothing to hide and you’ll only miss out on bits if you’re not paying attention and is good enough for the sake of the film, you don’t want the audience to have to chew on too much. Charlie Hunnam plays the role of Arthur with a level of confidence that borderlines arrogance yet he never crosses that line entirely. Jude Law’s Vortigern is the perfect opposite to that confidence as he constantly seeks approval from others. The action scenes are fun and exciting but I have some issues with a few of the fight scenes. We have come a long way with CGI, just look at all the work that was done in Rogue One, but we are still not to the point where the human body looks passable to the human eye. A few of the fight scenes rely on a CGI Arthur and you can tell that what you are looking at isn’t the real Charlie Hunnam. It took me out of some really cool bits during the movie. The third act climax of the film is also very weak and ends somewhat abruptly- although I didn’t feel cheated. It just kind of chugs to an end and it could have honestly used a few more minutes during the climactic battle (I can’t say much more without giving out massive spoilers!!). So while I’m very critical, I was very surprised with how much I enjoyed the film. Sometimes it’s better to go into moments in life with no expectations. I would still recommend this film to anyone who loves the fantasy genre of film. There’s a lot to like, far more than what the critics have suggested. These critics are taking the story of King Arthur far too serious and it seems like Guy Ritchie was just out to have a good time with a well-known legend. I want to highlight that the way exposition in this film was delivered was particularly fun. Seriously, if you loved Guy Ritchie’s take on Sherlock Holmes then I have no doubt that you will love this film. It’s just a shame that it has been such a dud in the box office as there seemed to be so much potential with a franchise.

That’s my take on these films! Have you seen these films? What did you think of them? Let me know below in the comments! Take care and thank you all for reading!

I'm a Bat...and I seduce things...No relations to Batman, Bat-Man, Man Bat, or ManBearPig....and maybe the last one was a lie... If somehow you like what you read you can follow me on Twitter: @Deylin07
View all posts by Bat Seducer Chris →
This entry was posted in All, Film/TV Reviews, Movies and tagged Charlie Hunnam, Dwayne Johnson, F8, Fate of the Furious, Guy Ritchie, Jason Statham, Jude Law, King Arthur, King Arthur: Legend of the Sword, Movie Reviews, Movies, Reviews, Vin Diesel. Bookmark the permalink.