The Legend of Zelda Experience Part VI: The Wind Waker 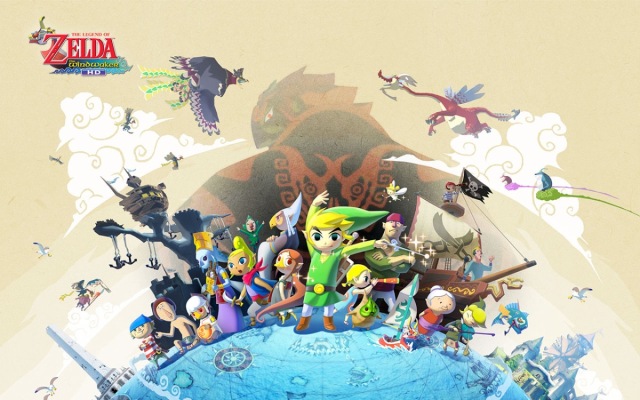 Nostalgia is a powerful pair of rose-tinted glasses, often covering flaws in a work with warm feeling and excuses. In The Legend of Zelda Experience, I have attempted to put those glasses on a shelf and see it anew. To my everlasting delight, The Legend of Zelda: The Wind Waker, is still a game I can point to when foolish folks claim that Video Games cannot be art. I am not referring merely to the graphics, but to the entire experience. 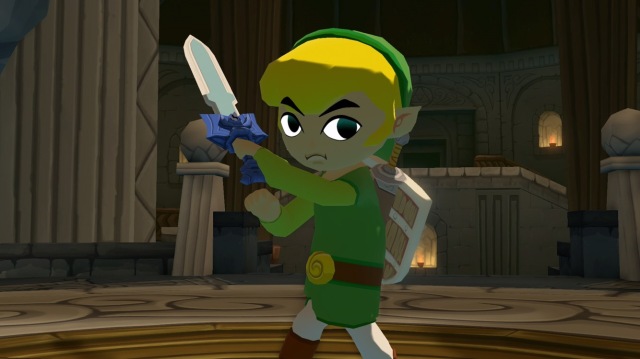 Cell-Shaded sass with a blade that cuts grass.

The Wind Waker borrows the core mechanics of 3D Zelda titles established in Ocarina of Time, but fine-tunes them and brings them into a new context. The mechanics are tweaked to include a new context-sensitive parrying system and allows the disarming of enemies and the use of their weapons. The targeting system and sword and shield combos are still present but they feel tighter and better defined than in Ocarina. Wind Waker also touts a phenomenal control of camera – and it’s made better by how gloriously open the world is. While the dungeon formula is mostly the same (solve puzzle, find key, unlock door, slay boss), the dungeons themselves are well-designed and add some interesting new spins like puzzles relying on wind physics or the ability to take command of or escort partner characters. Where Wind Waker truly shines, however, is in the over world.

A boy and his boat.

Hyrule is gone. This isn’t a new continent either. Instead a barren, inhospitable sea has swallowed all but the tallest peaks of old Hyrule. The Great Sea is my favorite setting in a Legend of Zelda game thus far. For the gameplay this means there’s no Epona or horses of any kind. Instead, your primary mode of transportation – and the best series partner up to this point – is the King of Red Lions, an enchanted boat that can speak. You have to sail to get anywhere which is a point of contention by many people due to favorable winds are necessary for traversal. Using the Wind Waker you can adjust the wind to your favor to make sailing easier, but that requires frequently stopping to make those changes. This is a problem remedied in the HD Remake through the inclusion of an item called the “Swift Sail”, which increases sailing speed and guarantees a favorable wind all the time. The King of Red Lions is more than a character who provides advice or a mode of transportation though. He’s also a ship equipped with salvaging equipment and canons stowed away in his comically small hull. Maps are important in the Great Sea, and they offer a chance of Pace to the standard Heart Pieces normally received at the end of quests. Instead, sometimes you’re given charts you have to compare to your existing map in order to go and salvage the chest that contains the real reward- like a treasure hunter. The many islands of the Great Sea contain plenty of secrets as well. The land area may be smaller than most Legend of Zelda titles, but the Great Sea makes up for it; and the land area that is there is still serviceable.

Hot-Take: This is a better alter-ego than Shiek

The story for The Wind Waker is simultaneously heartwarming, melancholy, and deliciously meta. Right from the get-go, we’re treated to a scroll styled rendition of the game’s backstory overlaid with great music. We learn that while the Hero of Time was away from Hyrule, Ganon returned and no one was there to stop him. In order to protect Hyrule’s citizens, the Goddesses had them retreat to Hyrule’s highest peaks and the flood the land, creating a Great Sea. Life went on and Hyrule became mere Legend to the islanders: a mythic past where land was an abundant resource. 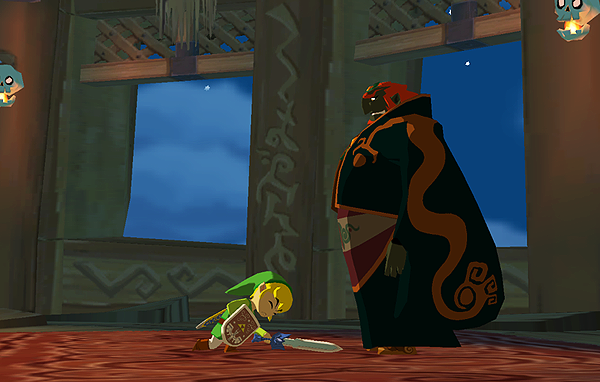 This iteration of Link is young and is coming of age by Outset Island’s standards. Tradition dictates that they clad those young men in the garb of the ancient hero on their twelfth Birthday in the hopes that they will embody the Hero of Time’s Courage. A giant bird called the Helmaroc King is being chased by a band of pirates when that same bird kidnaps Link’s sister and takes her to the Forsaken Fortress in the north. Rumor is that pointy-eared maidens from all around the Great Sea are being kidnapped. So Link decides to embark on a journey to infiltrate the Forsaken Fortress and rescue his sister: aided by the Pirates and most especially their Captain: Tetra. Tetra is a fierce but kindly pirate who agrees to help Link only after being reminded that his sister’s kidnapping is somewhat her fault. Naturally the attempt is unsuccessful and Link is thrown from the Fortress at the order of its mysterious master. Link is found floating by the King of Red Lions – the aforementioned magical talking boat who gives Link the Wind Waker: a magical conductor’s baton with the ability to master the winds. They set out to find the Goddess Pearls which open the Tower of the Gods and it is there that Link wins the recognition of the Goddesses and the title of Hero of Winds. He is also given access to the sealed away Hyrule: preserved in a bubble beneath the waves of the Great Sea. Here he not only learns that his guide, the King of Red Lions, is the last King of Hyrule, but also Tetra is a descendant of the Hylian Royal Family, and as such, has the birthright to be Princess Zelda. Ganondorf was sending for pointy-eared maidens in the hope of finding Zelda and, more importantly, the Triforce of Wisdom.
If Ganon gets access to all three pieces of the Triforce, he will restore Hyrule with him as its ruler. In order to prevent this, The King has Zelda hidden away and sends Link to reawaken the power of the Master Sword and reassemble the Triforce of Courage. After Link accomplishes these feats, Ganondorf invades the sunken Hyrule, captures Tetra, and takes up in his old tower. Link arrives just in time to prevent Ganondorf from extracting the Triforce of Wisdom from Tetra. However, with Link, Tetra, and Ganondorf being so close, the completed Triforce presents itself. And here’s the beauty of it: the King of Red Lions claims the Triforce and wishes for a future for Link and Tetra free from the burdens of the past. With that, Link and Tetra defeat the maddened Ganondorf in a Hyrule which is now truly washing away. The bubble breaks and Hyrule is sunken forever more.

A great location in a great game.

The music is anothe factor that blends familiar and new in great ways. While much of the soundtrack is unique, there are pieces like Outset Island that callback to Kokiri Forest in Ocarina of Time but makes it fresh and new. The title screen music, Dragon Roost Island, and The Great Sea theme are standouts as well. Some of the best music a Zelda game can offer and that’s saying a lot.

Wind Waker is unbelievably meta in its major theme. The game is about letting go of the past rather than dwelling on nostalgia. This is a lesson hard taught to fans of the franchise who were turned off by its charming cell-shaded cartoonish look. For me, Wind Waker honored Zelda tradition while boldly assaulting franchise conventions in a statisfying way. Allow yourself to let old Hyrule go and be willing to taste new flavors and go wherever the winds takes you and Wind Waker will delight. Hold on to the past too tightly and soon you shall be washed away.

Miss out on the previous articles in this series? Click these links to catch up! Part 1 Part 2 Part 3 Part 4 Part 5

Graduated top of my class in the school of hard knocks. I live in Raleigh, NC with my wife and (allegedly) zero kids. I work for a Property Management Company, create pointless trivia games, and manage various social projects. I'm as boring on a job application as I am an "About Me" page.
View all posts by nuclearfish2013 →
This entry was posted in All, Video Game Reviews, Video Games and tagged GameCube, Legend of Zelda, Link, Nintendo, Video Game Reviews, Video Games, Wii U, Wind Waker, Zelda. Bookmark the permalink.