The Box Office Report: I Ain’t Afraid of No Doll!

We are right smack in the middle of August! Time sure does fly! Welcome to The Box Office Report, where I attempt to give commentary on the previous weekend at the movies! Sometimes my comments are a bit on the wrong side but I’m pretty sure we all still have a good time! Right, guys? You don’t have to answer that. Let’s get on to the movies!

Warner Bros. seem to have struck gold in the middle of what is traditionally a graveyard of sorts for films. Annabelle: Creation doubled its production budget ($15M) in profit over the weekend opening only $2 million less than the original Annabelle ($37M). I find it extremely impressive that all of the films in this franchise, which it shares with The Conjuring, have opening weekends so close to one another. Along with the mentioned Annabelle, the other two Conjuring films opened at $41M (The Conjuring) and $40M (The Conjuring 2). So even though Annabelle: Creation opened less than any of these films isn’t a bad sign for the movie altogether. It’s actually extremely encouraging for a film with that has as low of a budget. The original Annabelle had a budget of $6.5M yet came out with $84M with its domestic total. I’ve reason to believe that WB wants Annabelle: Creation to perform better than the sequel and there’s a chance that could happen. The original Annabelle had an opening weekend multiplier of 2.27 and if we apply that with the opening weekend of Annabelle: Creation we get $79.4M. That seems pretty low but I think the film will do a bit better than that considering we don’t have another big horror release until It on September 8th. I think the film exceeds the total domestic profits that the original made but not by much. I’m going to sit on a $90M total for now. I have a sneaking suspicion that the film will do surprisingly well, something akin to what Suicide Squad did last year even though these are two different genres. I think studios are seeing that a profit can be made in August if only by simply lack of competition.

Well, we thought that The Emoji Movie would reign supreme when it made the least amount of money ever for an animated film opening in over four thousand theaters. That didn’t last long as The Nut Job 2: Nutty by Nature essentially looked at the world and said “hold my beer”. The Nut Job 2 now holds the distinct honor of have the worst opening by an animated film in four thousand theaters and it isn’t even close! The Emoji Movie opened with $24.5M only two weeks ago and opened in only 72 more theaters than The Nut Job 2. I’m at a loss for words when it comes to this kind of film, the kind that no one ever asked for. I see no reason why The Nut Job 2 was made in the first place. The original The Nut Job only made $64M domestically against a budget of $42M, I wouldn’t call this a home run or a good reason to green-light a sequel. The film went on to make $120M worldwide. Open Road Films should have seen this as a blessing and should have gone back to the drawing board. But no, we get a sequel to that film whose budget I’m not sure of, it’s not listed on Box Office Mojo, which makes me believe that it’s more than what its predecessor was. This is an embarrassing waste of time and I feel terrible for all of the people who worked on this film. You people deserve so much more than what you got.

Dunkirk continues to have soft drop offs each weekend. This is the fourth weekend in a row the film made over $10M. I’m sticking with my prediction of at least $190M domestically. The Dark Tower fell harshly but might be able to recoup some of the losses if it performs well overseas. $50M domestic and a strong showing in the foreign markets may make this film a slight profit for Sony. Girls Trip had another strong weekend. By the time you read next week’s article it’ll be sitting over $100M easy. The Emoji Movie looks like it’s going to make an okay profit, depending on what their marketing budget was, of course. I still think the concept of this movie is worse than The Nut Job 2. Spider-Man: Homecoming crossed over the $300M mark which is a great milestone. Maybe my $325M prediction is still a bit lofty but I’m still sticking to it. Kidnap is less than $1M from breaking even with its budget. I think the film makes around $33M, perhaps less, depending on how much it makes on the weekdays. The Glass Castle is a drama/biography film starring Brie Larson and Woody Harrelson. If you’re into those kind of movies with those actors then, by all means, go see it. Although Rotten Tomatoes hasn’t been so kind to it with a 49% rating so far. Atomic Blonde is really starting to fade even though the film made $4M. While the film will make more than the original John Wick did domestically, the foreign total is leaving a lot to be desired. There are still a handful of big markets that it hasn’t released in yet such as France (Aug. 16th), Germany (Aug. 24th), South Korea (Aug. 30th) and Japan (Oct. 20th) so we’ll have to wait and see a bit longer if this catches up.

Movies Out of The Top Ten That Are Still Worth Following:

War for the Planet of the Apes made out with $3M this weekend improving its domestic total to $137M. Was I too kind stating it’ll end with $147M? Despicable Me 3 also made $3M, improving to $247M. I’m still shocked at that foreign total. Detroit continues to fall flat on its face, earning $2.8M with only $13M made domestically. I thought this would have been a massive breaking out film for John Boyega. Seems I was wrong. Wonder Woman continues to push towards a record breaking total, earning $1.4M which improves its domestic total to $402.1M. It may take it a bit longer than next weekend but it’s going to surpass the record for highest grossing superhero origin film domestically, set by Spider-Man with $403.7M. Baby Driver finally crossed over the $100M milestone, earning $1.4M. This is a huge win for Edgar Wright. The guy deserves all the praise! Typing out Valerian and the City of a Thousand Planets probably costs more than the film made this weekend. It earned $900K (ouch) improving to only $38.3M (double ouch).

A Surprise From China 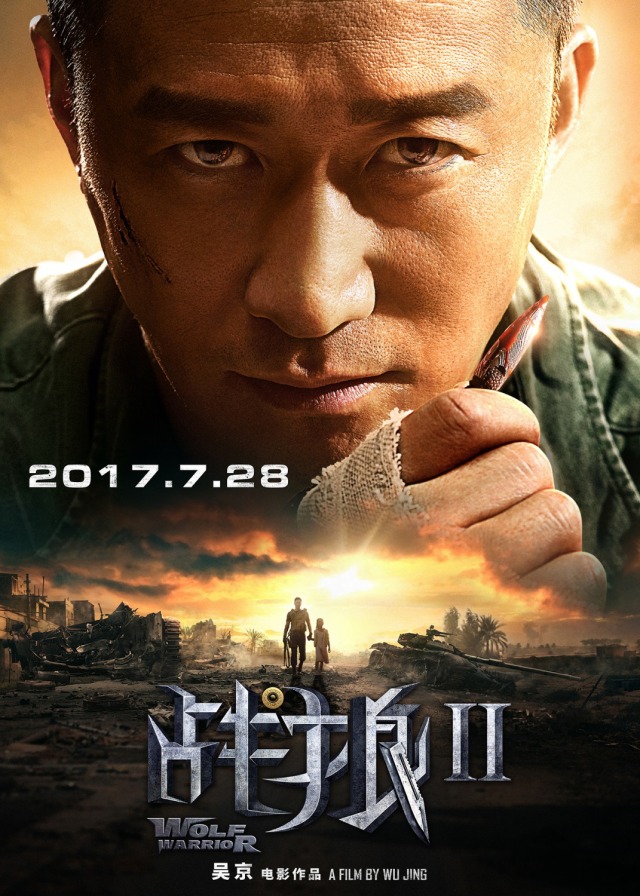 As Americans we tend to ignore major releases in other countries but I try to keep my ear to the ground when it comes to these types of things. Last year Your Name was the big buzz due to it making massive amounts of money in Japan ($235M). I got the opportunity to see the film this  year and can confirm that the buzz, and praise, of the film was absolutely warranted. It seems, though, that we have another film this year, released in a foreign country, which is causing a lot of buzz and is making a lot of money. That film is Wolf Warriors 2 in China. I know absolutely nothing about this film but the Chinese movie-goers are eating this film up to the tune of $679M. If we were to rank this film on the list of all time domestic grosses this would place third on the list! This is more money than The Dark Knight ($534M), Marvel’s The Avengers ($623M), Jurassic World ($652M), and Titanic ($658M)! The film has released to a few theaters in North America so I think it would be fascinating to check out a film that has made the Chinese audience turn out in a very massive way! I think it is fun to experience what other cultures deem to be a great film. Currently the film has made $682M worldwide and is the eighth highest grossing film of the year (Although Box Office Mojo has yet to add the film to their worldwide grosses list!).

Wonder Woman has made over $70M more than Batman v Superman: Dawn of Justice made domestically. I wish Guardians of the Galaxy Vol. 2 could somehow squeak out another $1.2M to reach $390M but I don’t see that happening. Spiderman: Homecoming’s domestic total sits comfortably between The Amazing Spider-Man and Spider-Man 3 which is a reasonable summary of the film. It’s better than The Amazing Spider-Man films but not quite as good as the Sam Rami franchise. The film is $6M shy of matching Iron Man 2 ($312M). Dunkirk still has a decent shot at making it briefly into the top ten. The film still needs another $21M, which should happen.

There are no notable movie closings this week.

Holy cow! Despicable Me 3 has reached over $900M worldwide. Could this film end up being the third film to reach $1 billion this year? I think there’s a chance but it’ll fall just short. Spider-Man: Homecoming has now made over $700M worldwide and that total is going to go higher due to it releasing in a China in September. The film recently opened in Japan which is why it got the boost that it did. It looks like Transformers: The Last Knight may actually cross $600M worldwide which is a feat considering how poorly the film performed domestically. Dunkirk is currently in fourteenth place with $363.7M and War for the Planet of the Apes is currently in eighteenth with $313.5M. As I started earlier, Wolf Warriors 2 should be in eighth place on this list.

That will do it for this week! Next week we’ll see an action comedy go head to head with a redneck heist film as The Hitman’s Bodyguard, staring Ryan Reynolds and Samuel L. Jackson, will go against Logan Lucky, staring Channing Tatum and Adam Driver. I’ll have the weekend’s box office numbers with my own twist, as always, next week! Thanks for reading and thanks for the support!

I'm a Bat...and I seduce things...No relations to Batman, Bat-Man, Man Bat, or ManBearPig....and maybe the last one was a lie... If somehow you like what you read you can follow me on Twitter: @Deylin07
View all posts by Bat Seducer Chris →
This entry was posted in All, Movies, News and tagged Annabelle: Creation, Atomic Blonde, Box Office, Dunkirk, Girls Trip, Kidnap, Movies, Spider-Man: Homecoming, The Dark Tower, The Emoji Movie, The Glass Castle, The Nut Job 2: Nutty By Nature, Warner Bros, Wolf Warrior 2. Bookmark the permalink.