Posted on October 9, 2017 by jameslhamrick

A man in his mid 20’s reconnects with a childhood friend who, currently having undergone a change in lifestyle that leads him to take charge more often,  invites him to stay with him until he leaves town. Also, he thinks humanity has been infiltrated and infected by creatures who take over their hosts though speech and eye contact. 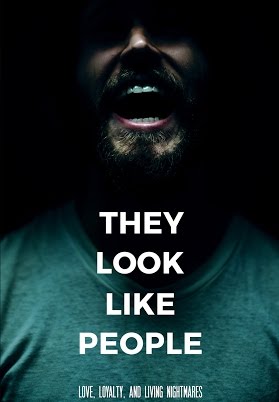 They Look Like People is a 2015 indie horror film directed by Perry Blackshear and belonging to the mumblecore genre. As such, it makes use of a largely improvised script, low production value including a lack of composed score, naturalistic performances, and a focus on dialogue and relationships over plot. Often and in amateur hands this can lead to stilted dialogue and delivery, and a plot that wanders aimlessly. Here, however, it is used to fantastic effect in creating believable characters with realistic relationships in a setting that feels authentic. Like other films in the genre, the plot is simple and mostly serves as a setup to explore and grow its characters. The film begins with Wyatt, played by Macleod Andrews, running into his childhood friend Christian, played by Evan Dumouchel, who subsequently offers him a place to stay so long as he’s here in town. Unbeknownst to Christian, Wyatt suffer from nightmares in which he sees loved ones grotesquely morphing into creatures not human, and has also been receiving late night calls from a mysterious voice warning that creatures have infected huge portions of the human race and have disguised themselves as friends and neighbors.

After these initial revelations to the audience, the majority of the rest of the film focuses on their friendship and the difficulty Wyatt has in keeping it together while wondering if he’s losing his mind. Because of that, the film lives or dies on its cast, and in this case the cast does not disappoint. Andrews and Dumouchel have great chemistry and after seeing the two together for only a few scenes, a genuine sense of history to this friendship is created. The games they play and the way they joke with each other feel familiar and believable to anyone who has maintained a childhood friend. While not as emotionally powerful or compelling as Michael Shannon from Jeff Nichol’s 2011 film Take Shelter, Andrews is given a similar task as an actor. He must convince the audience he believes something unbelievable and is struggling with his sanity in the process, and Andrews does well with the role. Dumouchel is also quite good as someone who’s implied to have been a somewhat pushover in the past and is now leading a life of someone who takes charge. He works out, excels at work, and has finally worked up the courage in asking out his boss, and Dumouchel does well in convincing the audience that this kind of lifestyle is not entirely the kind he’s used to. Eventually Christian’s boss, Mara, played by Margaret Ying Drake, becomes entangled in this friendship and slowly becomes aware that something is not quite right. While not given quite as much to work with as a character, Drake still fits in perfectly with the rest of the cast in creating a very authentic and believable dynamic between the three.

Blackshear’s direction, for the most part, avoids being showy or flashy. He takes us from scene to scene, developing and growing these characters and their relationships with each other through everyday and sometimes mundane interactions. Blackshear is able to avoid any sense of slow or poor pacing, though, by multiple means.  In understanding that there is little to unfold in this plot, Blackshear shows restraint by limiting the runtime to under an hour and a half. Most helpful to the films pace, however, is when it ventures into horror territory. Blackshear employs great sound design and long takes in creating feelings of unease and dread, furthering Wyatt to question both reality and his sanity. Blackshear directs the aforementioned dream sequences unnerving surrealism, while giving the late night phone calls a sense of chilling realism. There are multiple instances in which the film is able to create a near tangible level of tension, often bringing it to a fever pitch before allowing the audience to catch their breath. Where Blackshear may lose many is in the ending, with some most likely finding the conclusion unsatisfactory. Others, myself included, may enjoy the ending and find that it works well in tying up what the film is actually about.

While some may be turned off by a focus on character over plot and may find the ending disappointing, for those willing to exist with these characters and appreciate the film on its own terms, you will find a smartly written and reserved exploration of friendship amidst terror and anxiety.

I am a film obsessed college student who enjoys talking about geek culture in whatever capacity available. I think that DC and Marvel fans should unite, just to spite those pretentious Dark Horse Comics fans. I also co-host the podcast Underrated, where we defend movies that we think get a bad rap.
View all posts by jameslhamrick →
This entry was posted in All, Film/TV Reviews, Movies and tagged Cinema, Horror, Indie Film, Indie Horror, Movie Reviews, Movies, Perry Blackshear, Reviews, They Look Like People. Bookmark the permalink.