Iron Man 3: The Man Behind the Iron Mask

I am Iron Man.

That statement at the end of Iron Man defines who Tony Stark is: Tony Stark is Iron Man, and Iron Man is Tony Stark. They are one and the same, and they’ve matured a lot over time. 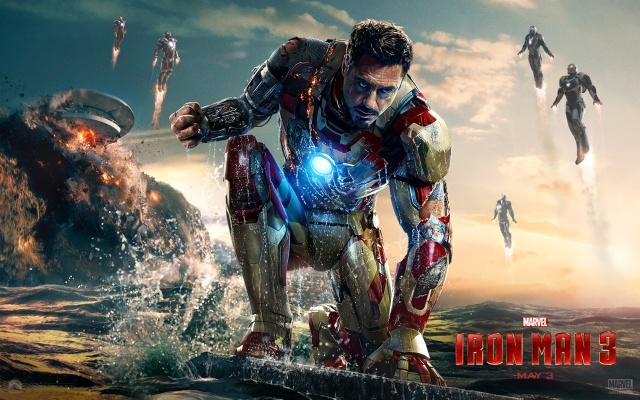 In Iron Man, we see the egotistical playboy billionaire start his transformation into something more. In Iron Man 2, we still have a narcissist who doesn’t play well with others, but he has made improvements: after all, he is in a stable-ish relationship now. In Avengers, he actually takes one for the team.

But who is this man without the iron? Who is the real Tony? He couldn’t be the Stark of the previous three films. Too much has happened. Too much has changed, and he couldn’t stagnant. A stagnant Stark is no fun. We need more of Tony Stark – we need to see who he has become.

For the first time, we really get to see behind the iron facade. We see the man who created demons in the past – the man who can’t sleep at night. Tony’s character development is integral to the movie, and Robert Downey, Jr. does a smashing job portraying Tony and all his stark emotions. Every step of the way Downey makes you believe he is the man behind the mask, and that is transferred powerfully on the screen.

Tony’s still Tony – he’s no sinner turned saint. He is still a diamond in the rough, but he’s starting to shape up nicely. Stark’s character is real and surprisingly relatable, even if he does have excessive time to pursue his rich-man’s hobby. It is nice to see his resourcefulness more in line with what we saw in Iron Man than what we’ve seen since then.

Sure, Stark’s a jerk, but you can’t help but like him. Stark’s appeal comes largely in always having the perfect comeback or response to a situation. It’s nice in action-paced movies to be able to break a smile and chuckle, even if the next moment you’re back on the edge of your seat.

Intense. That was the word I used to describe Iron Man 3’s first trailer, and it’s a description that stuck through the rest of the previews and fits the movie itself. After all, Iron Man 3 is an action film, and there’s enough of it in the movie to keep folks who live for action happy. Stark also has plenty of cool new tech to go around.

While there were times when the action and graphics were over the top, those moments don’t detract from the movie as a whole. Iron Man 3 has its share of bad guy destruction and revenge, yet the movie goes deeper than that.

There’s a lot in the previews to keep you in suspense, wondering what is going on between Tony and Pepper Potts. It’s hard for things to get stale when an old wanna-be suitor and a former one-night stand show up. Things get pretty heated before the end of the movie, and Tony and Pepper are in a different place in life than before. We get to see how they react to their current challenges, how that affects them as a couple, and how much Tony still needs to learn about women. For example, a two-story-tall stuffed rabbit isn’t exactly the best Christmas present to give your girlfriend, and Tony’s Christmas gift to the Mandarin (a formidable and surprising villain) is about as carefully thought out.

We’ve seen it before: Revenge. The man to man challenge and the explosive result puts a lot of people in danger which requires Colonel James Rhodes and Stark to team up once again in their beautiful working relationship. The War Machine has a paint job and has been re-christened The Iron Patriot while Tony has his latest (not greatest) Iron Man suit. Even with their seeming advantage, Iron Man can’t face-off against the Mandarin alone, and sometimes a genius-soldier team still needs back up.

All in all, I believe this is the best Iron Man (not Avengers) movie yet, but its strength lies in the fact that it is the fourth film featuring Iron Man — watching Iron Man, Iron Man 2, and Avengers before watching this film is necessary. For Iron Man 3 to shine, it needs the other movies. Otherwise, it’s similar to watching Return of the Jedi or Return of the King on by itself – a nice film, but what’s the point?

The beauty of Iron Man 3 lies also in having seen it all before without realizing it. Stark begins with everything, and then it’s taken away. He’s forced to cope and rebuild in unfamiliar territory without his toys or tools. Revenge. Triumph. Reform. Revelation. The skeleton of Iron Man 3 is Iron Man reborn, remade, and redeemed.

Even though the skeleton is the same, the flesh and bones are different. The fact is that the Tony Stark of Iron Man has been on a transforming journey. It’s not every day someone – particularly someone like Stark – has a change of heart, but those changes don’t happen overnight. Iron Man 3 lets us see more of that journey, and causes us to wonder what comes next for both the man and the movies.

Iron Man 3 shows us Stark raw – as we get to see less of the iron, and more of the man.

Amanda loves God, her husband, and her children. She is a full time stay at home mom who freelances in between chores. Books are one of her favorite things, and she prefers musicals, drama, and family films over action ones any day.
View all posts by Amanda Shreve →
This entry was posted in All, Comics, Film/TV Reviews, Movies, News and tagged Action, Disney, Iron Man, Iron Man 3, Marvel, MCU, Robert Downey Jr. Bookmark the permalink.