When I was growing up I used to not put much stock into gender stereotypes on TV (And still don’t). Obviously, blue was for boys and pink was for girls but I viewed the world of cartoons, and most shows I watched in general, as an equal place for both boys and girls. Normally you’d see women put into situations where the hero would have to save them culminating to an “Oh my hero!” type of dialogue between the victim and the hero. There were two shows that I remember watching where it wasn’t quite like that: Power Rangers and Justice League.In Power Rangers (I grew up watching the original first few seasons) you had Kimberly and Trini who could easily handle a group of baddies on their own. Obviously, the Rangers were stronger as a group but that’s what made it so cool was that each of them brought something unique to the group that allowed them to succeed when they worked together. The girls weren’t entirely viewed as either eye candy or just a warm body on set, they were part of a team and that team kicked a lot of butt. 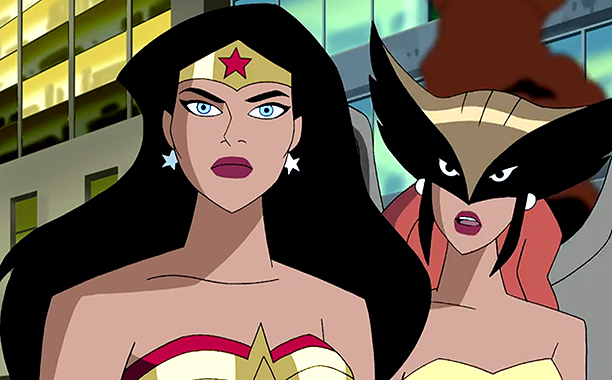 Justice League was where I was introduced to Wonder Woman and Hawkgirl. I didn’t have much of a care for Hawkgirl, personally, and her character always seemed to get stuck in situations that required her being rescued (or her only way of solving a problem was to bash it with her spiky mace). Wonder Woman, on the other hand, left an impression on me that she was an equal to Batman and especially Superman. From what I remember, she was always viewed as one of the leaders and never really played second fiddle to any of the other league members (unless the story was focused on another league member which is understandable). So with all of this, I decided to take on the task of writing about Wonder Woman in our DC Spotlight. I hope by the end of this you come to respect Diana for who she is and what she stands for, especially in the current political climate of the U.S., and perhaps the world at large. So let’s start by having a bit of a history lesson that most might consider being a bit odd. 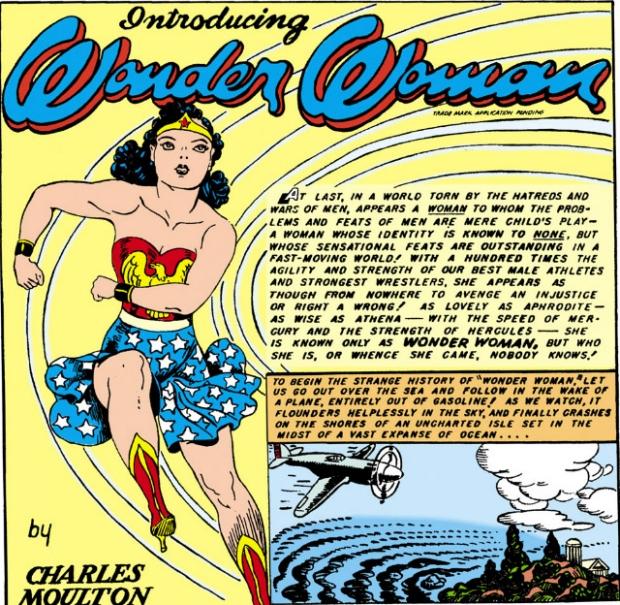 William Moulton Marston was born on May 9th, 1893. Also known as Charles Moulton, he was an American psychologist and inventor of an early version of the lie detector. He is also the “father” of Wonder Woman. Marston was married to Elizabeth Holloway and also had ongoing relationships with Olive Byrne, whom Elizabeth knew of and was fine with. In October of 1940 an interview of Marston stating that he saw “great educational potential” in comics was published and was heard by Max Gaines, comics publisher, who then hired Marston to be an educational consultant for National Periodicals and All-American Publications, which, interestingly enough, would eventually merge to become DC Comics. Marston may be created as the creator of Wonder Woman but his wife, Elizabeth, was the one who gave him the inspiration. Marston wanted to create a new superhero who didn’t conquer foes with bullets or strength but with love. His wife agreed to the concept but said to make her a woman and he complied. The creation of the character was absolutely inspired by the strong women of his day to the point where I think she was meant to be a beacon for feminists, those who desired for equality between men and women. There is speculation that the appearance of Wonder Woman is based on Olive Byrne, Marston’s partner, but there is no conclusive evidence of this.

Wonder Woman first appeared in All-Star Comics #8 in 1941. She is eventually given the backstory of being from the island of Themyscira and given the name Diana in the 70s. In the comics, she’s also known as one part of DC’s “trinity” as she was one-third of the founders of the Justice League with Batman and Superman being the other two. She’s had an undeniable popularity throughout her run in comics and one of the most beloved characters in the history of comics.

Marston passed away on May 2nd, 1947, due to cancer. His wife and partner, Elizabeth and Olive, continued to live together until Olive’s death in 1990. Elizabeth passed away in 1993. Marston was posthumously inducted into the Comic Book Hall of Fame in 2006.

Marston’s goal was to create a superhero that had all of the strength of Superman yet had the grace, care, love, and elegance of a woman. She’s a character that could absolutely go toe to toe with a villain but prefers to approach situations more diplomatically than the other heroes of her time. While I do believe some aspects of her character have changed over time I also believe that the Wonder Woman film showcased a lot of the original concepts that Marston had written into her character.

Wonder Woman gained a brief stint of popularity in the 70s thanks to the Wonder Woman TV series that starred Lynda Carter. This version of Wonder Woman inspired future iterations of the character in the comics and on the animated TV shows Super Friends and Justice League Unlimited. That would be the extent of her character’s appearance, outside of various DC animated movies, until her appearance in Batman v Superman: Dawn of Justice in 2016 and her first ever live-action solo film Wonder Woman in 2017.

What are her abilities? These are obviously different depending on the medium that she is portrayed in but most agree that she has superhuman strength, speed, durability, and longevity (she can live a long time), accelerated healing, superhuman reflexes, flight (that’s yet to be seen in her DCEU iteration), skilled in hand-to-hand combat, utilizes the Lasso of Truth (both as a tool and weapon), indestructible bracelets, boomerang tiara (I see you, Lynda Carter), sword, and a shield. Could you imagine a fight between Wonder Woman and Superman?

“There’s a general inclination for girls to gravitate toward female superheroes but until the Wonder Woman film came out it [never dawned on me] that it’s a character that meant a lot from a social standpoint. Black Widow (Iron Man 2, Avengers) was cool but Wonder Woman was a real superhero that stood beside the men and wasn’t much of a secondary character. The Justice League cartoon was [the most I saw of the character growing up], it wasn’t the show from the 70s or from the comics, but it was so fascinating to see a woman who could stand up to the likes of Batman and Superman and hold her own.”

I then proceeded to ask her if she was satisfied with the direction they’ve taken her character.

“[I’m] extremely happy with the direction of the character. After seeing what was going to happen with the TV show (NBC attempted to launch a live-action variation of Wonder Woman in 2011 but it and a The CW version of the character stalled.) it just seemed way too sexualized. For the first time, it seems she’s taken seriously and not taken as just a sex symbol. Yes, guys still comment on Gal Gadot being attractive but they also state that she can kick butt too. It’s awesome seeing little girls have a superhero they can look up to. It’s great seeing a guy (Chris Pine’s Steve Trevor) not only take on the secondary character role but own it and push the message as one to empower the role reversal. She seemed to really challenge [stubborn perspectives] in the 1914 world of men. The way the character is handled is a positive look at feminism and issues of sexism. I would hope that [moving forward] Wonder Woman and her story are taken just as serious as Batman’s or Superman’s. It’s just as serious of a story because it shows how important women are.”

In my personal opinion, I hope that moving forward they don’t force Wonder Woman into a relationship with someone just so that she can justify her position in the world. I would hope that the relationship between Bruce and Diana continues to be just a friendship and doesn’t turn into anything more than that. Although, I don’t fully trust people behind the scenes at either WB or DC to not turn it into something. 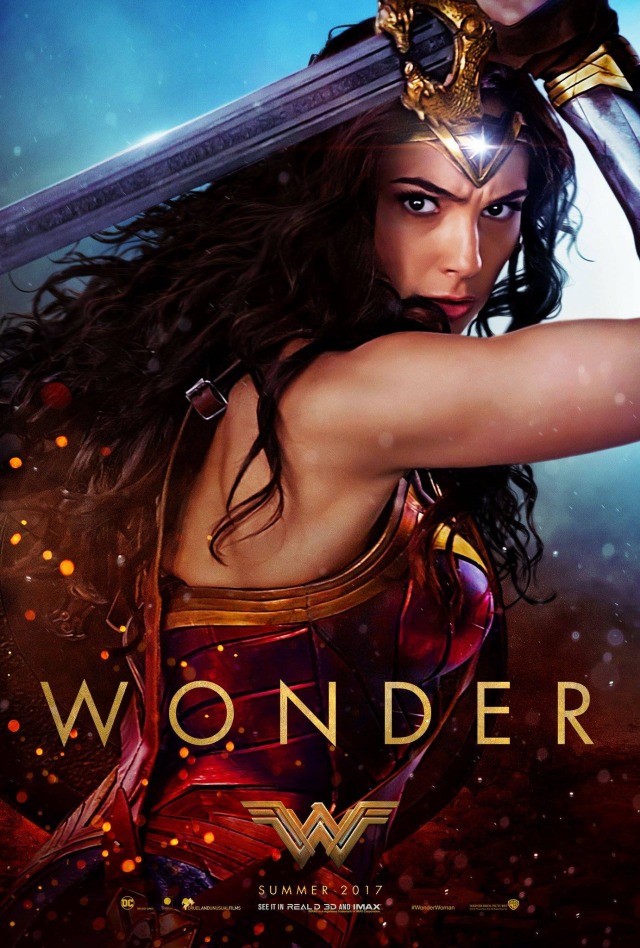 I hope in Justice League that Wonder Woman is shown to be a field general but I could see her taking a bit of a back seat to Batman when it comes to strategy. She will definitely be the strongest in the League until perhaps Aquaman or Superman show up.  I could see her forming a more motherly connection with the younger members of the Justice League, Cyborg and Flash, and a more brotherly bond with Aquaman since it seems their people, the Amazons and Atlantians, have interacted with each other in the past. The question is how will they continue to develop her relationship with Bruce and what will her relationship be with Superman. Until we see the film all of this is merely speculation and theory. November 17th can’t get here fast enough!

Check out other League Members such as Aquaman, Flash, Batman, Superman, and Cyborg!

I'm a Bat...and I seduce things...No relations to Batman, Bat-Man, Man Bat, or ManBearPig....and maybe the last one was a lie... If somehow you like what you read you can follow me on Twitter: @Deylin07
View all posts by Bat Seducer Chris →
This entry was posted in All, Comics, DC, Feminism, Movies, Television and tagged Comic Books, DC Comics, DCEU, Feminism, Justice League, Wonder Woman. Bookmark the permalink.