Hey guys, so can you keep a secret? If you can keep reading. If you can’t, please stop.

All right? Well I’m Barry Allen, AKA The Flash, AKA The Fastest Man Alive (Ha! Suck it, Superman! j/k please don’t kill me! Wait, you’re dead. Or are you? I’ll never tell.) Anyway, I’ve been asked by the powers that be, Batman, AKA The Dark Knight, AKA, Bruce Wayne (Okay, I’ve got to stop saying AKA, okay) and Wonder Woman, AK- nevermind.

Without further adieu and stuff, here’s me, Barry Allen, AKA The Flash:

I was originally created back in 1940 by Gardner Fox and Harry Lampert- wait, no, that wasn’t me. That was Jay Garrick (my hero!). Flash was perfected in 1956 by Robert Kanigher and Carmine Infantio (cool names, huh?) and that’s when I, Barry Allen (that’s my real name, by the way) took center stage in Showcase #4! I can think, talk, and run really fast (though that is an oversimplification) and I can vibrate through walls. I know, really cool, huh?! The coolest thing is I can travel through time and connect to the “speed force.” To quote a friend, it’s “more like a big ball of wibbily wobbly timey wimey…stuff.” Hey, I opened up the multiverse, who’s to say I didn’t meet him, or rather her, now? Anyways, all you need to know is I’m really fast and have some really cool powers, and stuff. Oh, also! There was this one time I ran so fast I ran into another comic book universe. I forget which one, but it was MARVELous (ha! Get it?). Fastforward a few years, and I married the hottest woman I know, Iris. Though, I don’t think we’re married yet in Justice League. If you see her, don’t tell her I know (time travel and stuff), but yeah, we totally get married and she totally learns about my secret and my equally as cool nephew Wally’s powers. 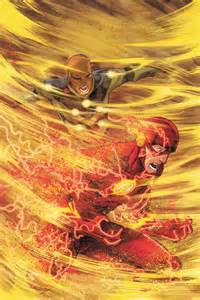 That’s the Speed Force. Really cool, but it can cause a lot of trouble. Trust me.

All right, now that my origin is out of the way- wait! No, we haven’t! Sorry. We have covered who created me. My origin as Barry Allen is pretty cool. But before that, tragic. My mother was murdered and my father blamed for it. I knew and still know he was innocent. I think that’s what got me to be a forensic scientist at Central City. Enough with the sad parts, now comes the cool stuff: my origin story.

So, I was working late one day at the lab (late kind of defined me for a long time) when a bolt of lightning hit the lab, spilling chemicals all over me. I guess somehow the lightning and chemicals mixed together just the right way to turn me into the cool hero you see today. Having superpowers and being a hero has tons of perks! I was part of the original founding of the Justice League, and as you know if you’ve read the comics or seen the trailers for the upcoming movie, you also know I’m the funniest. Probably because I have a quick wit (get it, cause I’m fast?). It has its perks, but also plenty of drawbacks. First, if any of the nefarious supervillains, especially Gorilla Grodd and Professor Zoom (aka Reverse-Flash, original name, right?). These have been thorns in my side for a long time now, especially Reverse-Flash. Notable things Professor Zoom has done to inflict harm on me is killing my wife, Iris, and having his life goal to destroy everything I love. He’s even the one who killed my mother. I stopped him once, but created a whole other timeline in the process. You can read Flashpoint or watch the film that’s loosely based on the events, The Flashpoint Paradox. Dark, gritty, and good.

That’s me. Probably about to do something really cool, or really stupid, or a mix of both. Probably both.

Anyway, um, I can’t really tell you much more about myself to prepare you for the movie. I think you’re gonna really like it. And, early reactions are as I guessed, I’m the fan favorite. And plus, I get to go into battle with the freaking BATMAN! How cool is that?

I think that’s about it. You should be prepared for the awesomeness that is me in Justice League. If not, oh well. Gotta run!

That’s me and my super friends. Ha! Can’t believe I got to say that!

If you like me, check out my new friends Aquaman, Wonder Woman, Batman, Superman, and Cyborg.

Hello, my name is Joseph Hamrick. I enjoy reading stories I find, which provoke thoughtfulness and introspection. I am a Christian, so most of my writing and thinking comes from a theological perspective. I am currently engaged to Jesse Berden, and will Lord-willing be able to call her my wife (and subsequently update this profile) on March 23. I love contemplating on the moral, philosophical, and theological aspects of what I read and watch. I keep a weekly column, "Something to Consider," for the Greenville Herald-Banner. Along with that, I write on a regular basis at www.servantsofgrace.org.
View all posts by Joseph Hamrick →
This entry was posted in All, DC, Movies and tagged Barry Allen, DCEU, Jay Garrick, Justice League, Reverse Flash, The Flash, Wally West. Bookmark the permalink.

5 Responses to Character Spotlight: The Flash